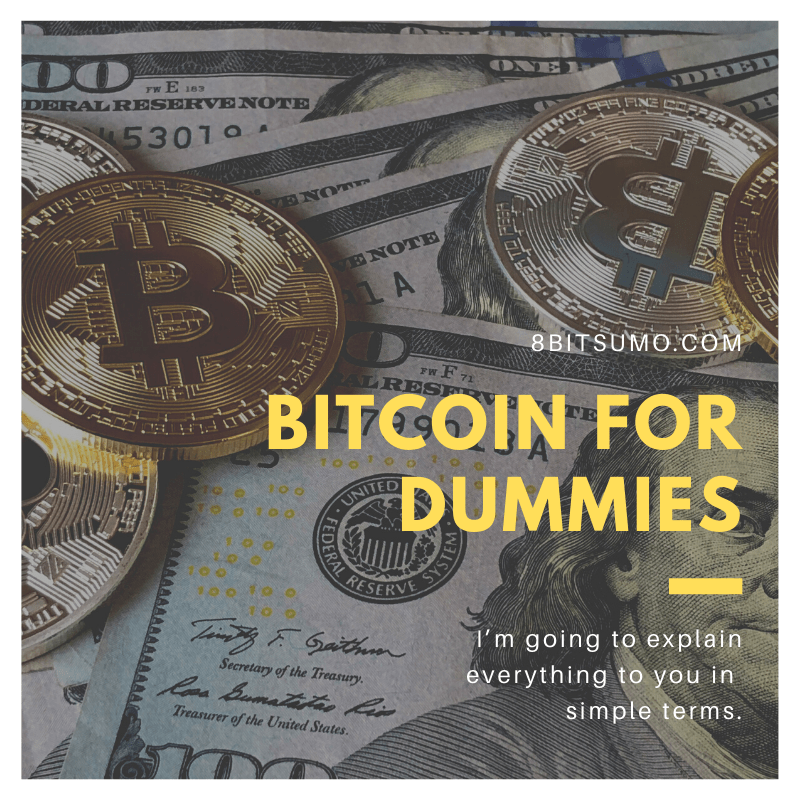 If you’ve been following the news, you’ve probably heard about Bitcoin and people who mine it. But you might still not understand what Bitcoin is and how it works. Well, don’t worry. I’m going to explain everything to you in simple terms. And then you can decide whether you’re willing to give it a try.

Let’s start simple. Bitcoin is a cryptocurrency. In fact, it’s the first cryptocurrency created in 2009. Since then, many similar currencies have appeared, called altcoins (bitcoin alternative). But the question is what cryptocurrency is.

Cryptocurrencies are digital or virtual money. In other words, money that doesn’t exist. Cryptocurrencies can’t be printed in notes or minted in coins. You can’t touch them or see them, but they have monetary value because people have trust in the system.

Cryptocurrencies can also be described as lines of a computer code. To produce them or mine them, you need to solve mathematical computations and invest computer processing power and electricity.

And their value is determined by the supply and demand of the market. That’s why the exchange rates might fluctuate drastically. And that’s why virtual money can lose value or gain a greater value in time. For more information, you can watch this video.

Bitcoin first appeared in 2009. And you might find it hard to believe, but it wasn’t the first attempt at creating a cryptocurrency, but it was the first successful one. Its creation is attributed to someone named Satoshi Nakamoto. However, no one knows who he is. And he disappeared from the face of the Earth somewhere in 2010.

So, how did it happen? Well, on 31 October a paper appeared called Bitcoin: A Peer-to-Peer Electronic Cash System and a link to it was posted to a cryptography mailing list. Later in the year, the bitcoin software appeared, and Satoshi Nakamoto mined the first bitcoin block and received 50 bitcoins as a reward.

The initiative was carried on by other programmers and supporters of the cryptocurrency revolution creating this mass peer-to-peer network system for exchanging digital units. Currently, bitcoin value is estimated at $17,000. That’s quite an improvement from $0,08 in June 2010.

When you take this into account, you can understand why Satoshi Nakamoto, or the group of people hiding behind this pseudonym, is not keen on disclosing their identity. He or they are probably among the wealthiest people on this earth.

But why does it matter who created Bitcoin? Well, people estimate that Nakamoto owns about 1 million bitcons. So some are worried that Nakamoto might flood the market with bitcoins and that it might lose its value quickly.

This comes from a guy who completely missed the Internet and still doesn’t use email.

Every great dynasty in history has fallen.

Bitcoin is a decentralized system. It doesn’t have a central body like a government or a bank to decide:

Bitcoin also doesn’t have a central investigative body to keep track where all those bitcoins are or to investigate fraud. No one cares what you’re doing with your bitcoins as long as you’re not trying to cheat the bitcoin system.

Just like cash, you’re responsible for your bitcoins. You can lose them if you lose your wallet or your hard drive crashes. But you can store as many bitcoins as you want and carry them everywhere.

The banks and governments, on the other hand, keep the amount of money in circulation under control and they can print new money under some conditions. But the downside is that the currency loses its value, e.g., deflates.

So, unlike traditional currencies, there is a limited number of bitcoins that can be created – 21 mills. It’s estimated that this number will be reached somewhere in 2140 and after that, no more bitcoins will be generated. And since the number of bitcoins is limited it’s probable that its value will grow with time.

You’ve probably heard about the Peer-to-Peer Network and its role in sharing stuff over the Internet. In simple words, you have a file, and you use software like uTorrent to share it with others. So in a sense, bitcoins are similar to those torrent files. But not exactly.

With Bitcoin, you don’t need a PayPal account, a bank or other financial institutions. What you do is that you directly send money to the seller through a peer-to-peer network without the help of an intermediary. You also don’t have to pay a hefty fee for the transactions.

It’s just like handing someone cash; the only difference is that you’re doing it digitally. Well, then can you just send yourself a couple of bitcoins and get rich in seconds? Or spend money you don’t have in your account? These are valid questions, which have a simple answer.

Unlike music or movies, files bitcoins can’t be copied or duplicated. So, no you can’t send yourself a small fortune of bitcoins. Every transaction ever made with bitcoins is recorded in something called a “ledger,” also known as a blockchain.

You know that banks and accountants keep ledgers of their transactions and your credit and debit status. Well, the blockchain is something similar with several exceptions. Unlike traditional ledgers:

If you made a change in one copy of the ledger but not others, the people maintaining the ledger will spot the difference and correct it immediately.

So, when you decide to make a transaction, you’re announcing to everybody maintaining the ledger that you want to send X money by providing your account number, the recipient account number and the amount of bitcoins.

Then all parties who keep a copy of the ledger update it accordingly by increasing the bitcoins in X account and decreasing it in yours. All transactions ever made with bitcoins are included in the blockchain, and when that happens, they can’t be changed. Why?

To change an existing block will mean to change all the other blocks in the chain since every new block contains a hash from the previous one. It will require a significant amount of computer power and skills to fake a whole string of blocks. That’s why transactions are irreversible and hardly impossible to counterfeit once completed.

What’s also important here is that everyone can see who sends who what amount of bitcoin and when. But they can’t see the name behind the account numbers so sending or receiving bitcoins gives you a sense of anonymity, but doesn’t make you completely anonymous.

How does Bitcoin work?

So, you’ve decided to give Bitcoin a go. But how exactly does it work? Well, first you must have some Bitcoins at your disposal. But how do you get bitcoins? Let’s see:

Then you need a wallet. No, I’m not talking about your ordinary, leather wallet. You need a Bitcoin wallet. Fortunately, you have many available:

Then you need to know the address of the recipient, and you’re ready to begin.

So, you want to send five bitcoins to X in exchange for a particular service or as payment. What’s keeping this X from using your account number and sending himself all your bitcoins? First, when you create a Bitcoin wallet, you get an account and a private key linked to this account.

Both the public and private key generate a unique signature for every transaction you make. And you use this unforgeable signature to sign the transaction and prove that it’s from you.

It takes on average 10 minutes to create a block of the transaction with the required proof-of-work. When the block is announced to the network, it’s included in the blockchain and considered “confirmed.” Another block is added and another one and so on. To prevent double spending the transaction should be at least several blocks deep.

The people maintaining the ledger have the task to verify that the transactions are legit and that no one is trying to scam or rob someone else. They also validate that you’re not double spending your money and they bundle the transactions into blocks.

Although this might seem simple, it’s a very complicated process. I’m not going into technical details. You just need to know that to add a new block of transactions to the existing chain you have to solve a complicated mathematical problems or issues which requires a lot of computer power, electricity and time. That’s called proof-of-work.

When you find the solution to the proof-of-work, the new block gets added to the blockchain and announced to the other miners. While it’s tough to solve the proof-of-work, it’s easy to check if all the requirements have been met. If you’re interested, you can read more about it here.

So, are all those people doing it out of the goodness of their hearts? Of course not. The process of adding a new transaction to the blockchain is called mining. And when you successfully add a new block you get rewarded with a brand new bitcoins. Currently, for every newly generated block, you get 17.5 bitcoins.

However, the number of bitcoins received for this task will be reduced by half with every 210.000 bitcoins. And the mining difficulties constantly increases so that a set amount of new bitcoins are created.

Even if bitcoin is not real or touchable, it has many advantages over traditional currencies:

The loudest Bitcoin detractors (Jamie Dimon, Warren Buffett) have been the men behind the greatest financial frauds (Housing crisis, Wells Fargo) of our lifetime.

Good luck to them.

After all, we’ve said and done you might be wondering if Bitcoin is legit and whether it’s officially recognized as a currency.

Well, bitcoin is legitimate in some countries, banned in others and frowned upon in thirds. Often, scams and ransomware demand payment through Bitcoin. Moreover, people involved in shady business sometimes use Bitcoins to hide their activities from the government. So, you have to be careful when you’re paying with bitcoins.

On the other hand, Bitcoin and digital currency have been recognized by Japan as a “means of payment” in 2016. Ever since then, Japan has turned into a driving force and eager supporter of the cryptocurrency.

This September, Japan officially recognized eleven companies as registered cryptocurrency operators and enforced specific regulation to prevent money laundering through cryptocurrency. Moreover, there are rumors that Japanese banks are planning on introducing their own digital money called J-Coin.

In the end, the decision to buy and use Bitcoin is up to you. The one thing you must remember is that no bank is backing the value of Bitcoin and its price might go up or down very quickly. It all depends on the supply and demand of the market and how much people trust the system. And there are those that called Bitcoin a bubble waiting to burst.

So what do you think of Bitcoin? Do you use it? And do you think that Bitcoin will turn into an official currency in the USA anytime soon? Share your thoughts in the comments.

What is Bitcoin Halving?

What is a Bitcoin hard fork?

What is Bitcoin’s Lightning Network?

3 Ways to Buy Bitcoins with a Credit/Debit card

Hello, I’m James Dorsey (aka Whale Sumo) . I’m a specialist in computer sciences with vast experience and practice. As a graduate of the California Polytechnic State University-San Luis Obispo, I’ve worked on expanding my knowledge about computers and malware. My sole purpose is to teach customers how to prevent serious malware attacks and give them a comprehensive removal guide for getting rid of viruses. To do my job well, I research existing malware so that I can inform my customers how serious or how harmful these viruses could be. In the morning I can’t think of anything else but what virus removal instructions I can give my clients. I try to come up with the most helpful ones that won’t be hard to follow.